My kitchen is a little less conventional this month. This trip has been a long time in the planning, and as such my temporary kitchen has been fairly well thought out. I thoroughly enjoyed shopping for kitchen gadgets that were perfectly suited to camping. I'll just show you a few this month, as my internet access is limited, and I'll save some for the coming months. So, in my kitchen....... 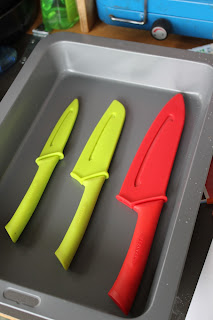 Since buying a block of Scanpan knives for home a couple of years ago, I simply cannot do without good knives, but because all of my utensils are filed in plastic containers in the camp kitchen, I thought the risk of cutting myself on a sharp knife while diving in for a wooden spoon, was quite high. When I saw these coloured Scanpan knives with plastic sheathes, I had to have them. I didn't buy all 3 together, and when I went back for the big one the store only had red, so unfortunately they don't all match, but they are fantastic none the less.

In my kitchen is a collapsible colander. 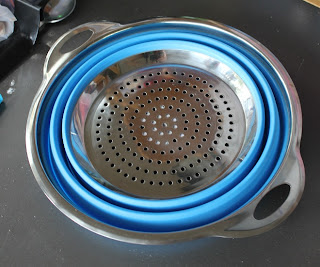 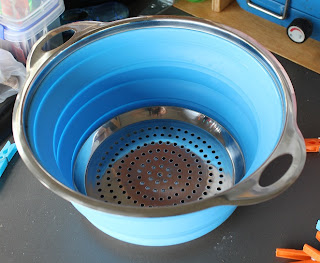 I had been pondering over the idea of a camping colander for a while (doesn't everyone?). I had decided they were too bulky and I'd just make do by angling a saucepan lid on the pan to drain/strain. Then I saw this fantastic collapsible colander at a camping store. It was $20 which I thought wasn't bad for what it is, and it fits perfectly into of my utensil containers.

In my kitchen is an oven thermometer. 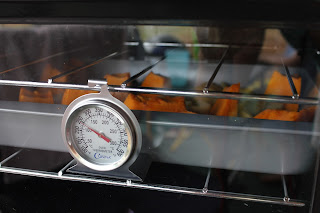 With the temperature control being a bit difficult in the gas oven, and the built in thermometer being placed at the rear of the over, I wanted a second thermometer to gauge the temperature difference between front and back. I picked up this nifty little oven thermometer for less than $10, and it hangs inside your oven on the shelf. I'm still in the experimental phase of baking in the gas oven, but this little gadget helped to make a batch of Celia's Fudge Brownies this afternoon, and then home-made pizzas for dinner. Both were devoured before I could get a photo, so I'd say that's a win for the oven and the thermometer!

In my kitchen is a stainless steel kettle. 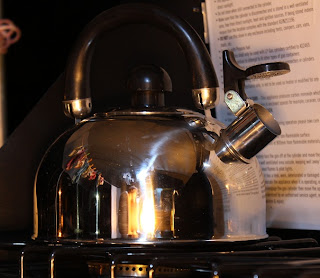 I was NOT making a cup of tea every night with a billie, and then burning my hands while using some pliers and an oven mitt trying to pour the water which would inevitably end up all over the floor and/or me in the process. So I bought a stainless steel kettle for the gas stove, which has a flattenable (I just made up that word) plastic handle for storage, a removable lid for easy filling and a whistle, and it's just so shiny! I never drink tea in the evenings at home, but there's something about camping which makes me need a cup of tea once the kids are in bed, and this kettle makes the experience so enjoyable.

That's about all I have time for tonight. I'll bring you some more exciting camping, kitchen suprises in June. Take a look at Fig Jam and Lime Cordial to see what's happening in some other people's kitchens this month.
Posted by Pam at 7:17 AM