Wow, it's been a long time. The Kimberly consumed my energy and attention, and deprived me of electricity, phone reception and internet access. Right now we're in Nhulunbuy, NT, staying with friends, so I have some time to show you what I have in my kitchen.

Before leaving Perth I saw a photo of someone making use of a tiny apartment with a mobile herb garden. I didn't really have the time to set up anything complex, but when I saw these cute containers in Bunnings I thought they would be perfect. It's basically a little tub with some compressed soil, a packet of seeds and a plastic lid. You add water to the soil to make it expand, sew your seeds and cover with a lid until seedlings emerge. The clear plastic lid makes it like a little green house. Once the seedlings are established you can remove the lid. 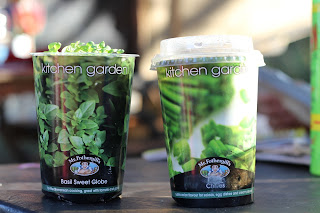 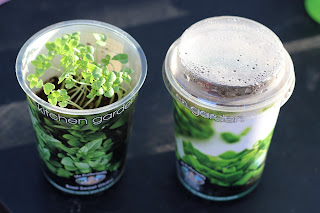 The basil is much bigger now than when I took this picture, and it's almost at the point of picking. Dried herbs have served me well on the trip up to now, but soon I'll be able to make use of these fresh ones. The chives have a little way to go but they are growing well too.

In my kitchen is a small set of electric scales. These are identical in design to the ones I have at home and cost me $6 on clearance because apparently no one wanted to buy the random patterned version. I have to admit I haven't been using them as religiously as I would at home. Camping for the last 7 weeks has brought out the less precise and more ad hoc cook in me. 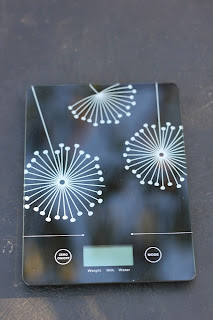 To do the camper trailer justice, I thought I should show case the most valued aspect of the kitchen: the electric water pump and tap. Mk 1 of the  kitchen had a manual pump tap, and after a weekend trip of pumping water by hand, at approximately my shoulder height, it was time for plan B. We carry up to 120L of water in the tanks, and all this I can access with a handy tap. Running water is great! It's just like being at home. 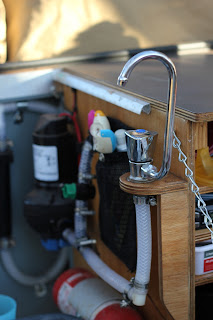 I've recently acquired a camp oven, the type you put in a camp fire. I've already made casserole, muesli bars, damper and a cake in there but I'm still perfecting the art. I'll be sure to snap a picture for next month's In My Kitchen post. Take a look at Celia's blog over at Fig Jam and Lime Cordial to see what's happening in some other kitchens this month.
Posted by Pam at 3:57 AM