A friend of mine has a little girl the same age as Poppet with an egg allergy. We see them a couple of times a month, and I often like to bake a treat for the kids and the grown ups, so I kind of made it a challenge to come up with a variety of egg-free treats that the littlies like. Since the egg allergy diagnosis, my friend has observed some other food intolerances including dairy. While there are plenty of egg-free recipes out there, omitting dairy from the equation makes things a little more difficult. I'm always up for a bit of a challenge in the kitchen, so when my friend asked me if I would make her daughter's third birthday cake, I replied "Challenge accepted!"

I really didn't want to go down the "pretend egg" route so looked for some tried and tested recipes out there. Needless to day there was a lot of sampling going on in my house in the month leading up to the birthday. I tried a chocolate cupcake recipe which stuck to the roof of your mouth, then kind of dissolved into a sticky mess in your throat. I tried a vanilla cake recipe that looked and tasted like a pancake. It was an improvement on the chocolate attempt but was hardly birthday-cake worthy. I was beginning to think I might have bitten off more than I could chew (pun completely intended) when I googled "egg substitutes" and found this page. I pulled out my beloved Golden Circle copy of Cooking: a common sense guide, and picked out a simple butter cake recipe and egg- and dairy-free'd it. My plan was to start at the top of the egg-substitute list and work down until something resembled a cake in taste and texture. Fortunately for me, the first on the list worked a treat (I crack myself up). The resulting recipe looked like this:

Buttercream icing
I doubled the recipe as I was making a number 3 and needed two round cakes to do this. The cake itself turned out really well. Moist yet fluffy, and held its form well enough to cut and shape. Getting the buttercream right was a bit more tricky. Nuttelex has quite a distinct flavour and this wasn't masked by vanilla extract, which is why I used almond essence. That stuff is strong! Definitely strong enough to hide the fact that there's no butter in that icing. You could probably get away with 1/4 tsp. A three year old birthday also called for something more exciting than plain white icing, so I used pink and blue food colourings to make pink and purple. The oil in the Nuttelex can cause the buttercream to separate a little, and this was more obvious when using food colouring, leaving the icing a little streaky and clotted-looking. I tried to minimise this by keeping the colours fairly light. You can see the streaking slightly in the pic of the cupcake below. The resulting cake (and cupcakes) was impressive, even if I do say so myself. Those who didn't know it was egg- and dairy-free didn't pick it, and those who did commented on how "normal" it tasted. I actually preferred the taste over a normal butter cake which I usually steer away from. 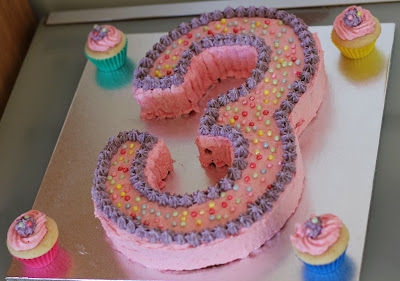 The cut parts of the cake (the inside edges of the number 3) were difficult to ice, and I used a flat tip on my piping bag and piped in strips so as not to agitate the cake crumb. This looked a little bit dodgy but less dodgy than having cake crumb strewn through the icing. 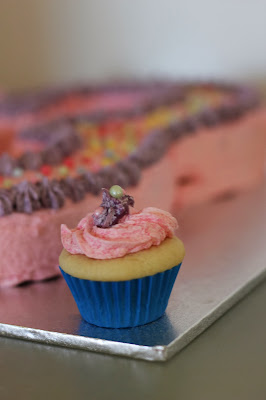 Even the little coloured balls on top were egg-, dairy-, soy- and everything else-free.
My friend's little girl enjoyed her cake, but has since removed gluten from her diet in an attempt to get a handle on food intolerances. This is a challenge I am yet to have much success with! If anyone has any egg-, dairy- and gluten-free recipes that are tasty and don't dry out within hours of baking, I'm all ears. ﻿
Posted by Pam at 6:10 AM