After a busy weekend down south including a triathlon and our first camping trip in the home-made camper trailer, I was in the mood for something with a high satisfaction to preparation time ratio. Something where I could put in little effort but reap tasty benefits. The solution: pizza and crumble, two of my "comfort foods".

Pizzas are a dinner that hubby loves, the girls will eat, and are almost as quick to prep as a salad. I always use some sort of wrap or flat bread as a base. We love our bases thin and crispy, and while I've made my own before, we still prefer a simple wholemeal wrap. Toppings vary depending on what is in the fridge at the time. Sometimes I use home-made pasta sauce, tomato paste or BBQ sauce. Yesterday I tried a shop bought pizza sauce which was basically tomato paste with herbs mixed through. It wasn't anything phenomenal but it was still nice. Chicky is fussy when it comes to toppings. Last night her pizza was topped with mozzarella cheese, halved cherry tomatoes, capsicum and green olives. The rest of us also had field mushroom, pepperoni and baby spinach. I managed to grab a photo before they went into the oven, but you've got to move quick around food in this house, and as soon as they were cooked they were being eaten, so unfortunately I didn't get a "finished" photo. 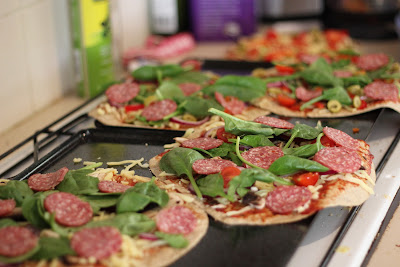 Dessert was apple and rhubarb crumble. I put this in the oven then went to the gym. When I came home half of it was gone, and the rest was in no way photogenic, so the "before" shot of the rhubarb will have to do. 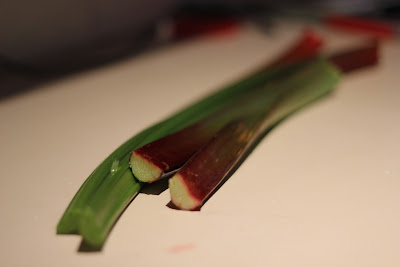 This is my favourite crumble recipe. It's loosely based on a recipe from The Australian Women's Weekly Cookbooks: Cooking Class Basic. It's not terribly evil so I don't feel like I'm completely ruining a week of exercise by eating it.

I love crumble served hot with vanilla icecream, but it's also very yummy drowned in custard. I also vary the fruit that I use. Apple and raspberry is another great combination. You can even use tinned baking apples and frozen berries to cut down on the prep even more.